The story of Beinn Bhreagh is not told solely by Beinn Bhreagh Hall, but by all the buildings and lands together.  To tell the story of one, but not the others, misses a major part of the historical narrative that makes Beinn Bhreagh an important part of Canadian history.

What we call Beinn Bhreagh today, once was referred to as Red Head, so named for the cliffs still visible at the point of the peninsula.  The land was divided into strips of property, most of which crossed over the top of the mountain and to the Bras d’Or Lake on the other side at the point.

Having fallen in love with the Baddeck area, in 1886 Alexander and Mabel initiated the process of purchasing the end of the peninsula for their estate, at that time owned by many different people. After successfully purchasing hundreds of acres, it was the purchase of the final piece of property that connected all Bell’s land together that inspired the building of Beinn Bhreagh Hall.

It was the belief of the Bell Family that providing “decent places for our work people” was a bigger necessity than building a large house for themselves, which is why there were many houses built prior to Beinn Bhreagh Hall’s construction.  In the early 1900s, the Bells were trying to find a way to make the estate more self-sufficient and established departments, each with a department head who would report to an estate manager.  These departments included the Laboratory, the Nursery Department, the Farm Department, the Stable Department and the Buildings and Wharves Department and each had their own responsibilities for the estate, be it looking after the upkeep of the roads, selling produce to Beinn Bhreagh Hall and elsewhere, or the many jobs of keeping a large estate in working order.

The land continued to be farmed by employees, with beef and dairy cattle, pigs, chickens, vegetable gardens, fruit trees, and hay crops all being produced.  The entire property was the site of various sorts of experiments – be they on land, or water or in the sky.  By 1907, the Bells had created, and maintained, twelve miles of roads stretching around, up, and down the mountainside.

Beinn Bhreagh Hall is part of Beinn  Bhreagh, a patchwork of privately and jointly held lands that have been used and enjoyed by the Bell Family for generations. Beinn Bhreagh Hall, referred to by the family as “The Point,” and its surrounding gardens are located at the point of the Red Head Peninsula with views of the Bras D’Or Lakes in Baddeck, Nova Scotia.

Originally farmland, the 22 acres surrounding Beinn Bhreagh Hall include a landscaped garden rich in botanical history and diversity that flourishes due to a microclimate that creates a fertile environment for exotic trees and fruits. The landscape was planned primarily by Mabel, who learned a love of gardening from her mother and her father, Gardiner Greene Hubbard, the founder and first president of the National Geographic Society.

Completed in 1893, the building is an iconic Shingle Style building and in an iconic Northeastern US style, and perhaps the only building of its kind in Canada.

A Nova Scotia firm, the Rhodes Curry Company based in Amherst, constructed the building between 1891 and 1893, using all local materials at a cost of $22,000. The house contains 37 rooms, 17 fireplaces and 11 bedrooms. Alexander and Mabel Bell and their daughters Elsie and Daisy spent most of their years here between 1893 and 1923. The house retains its heritage value from the period of Alexander Graham Bell and Mabel Hubbard Bell’s residency.

“He is quite a different person here from what he is in Washington.  Here he is the life and soul of the party.  Nothing is done without him, no detail relating to our enjoyment, comfort or safety escapes him.  He is forever on the go………” — In a letter from Mabel Bell

The historic value of Beinn Bhreagh Hall and surrounding property is embodied in the physical value of the house, landscape, landscape features, vistas and associated structures. It was also a hub for scientific discourse, with iImportant people from science and government coming as guests of the family.  While there, they engaged in lively and thoughtful discussions. Just as salon-type gatherings in city centres focused a spotlight on the notable persons who hosted them, the unsual and delightful setting of the Cape Breton estate of the Bells also became known in the era as a centre of importance. (B.White, 2017)

Designed by Boston firm Cabot, Everett and Mead
Built by Rhodes, Curry Company from Amherst in 1892-1893 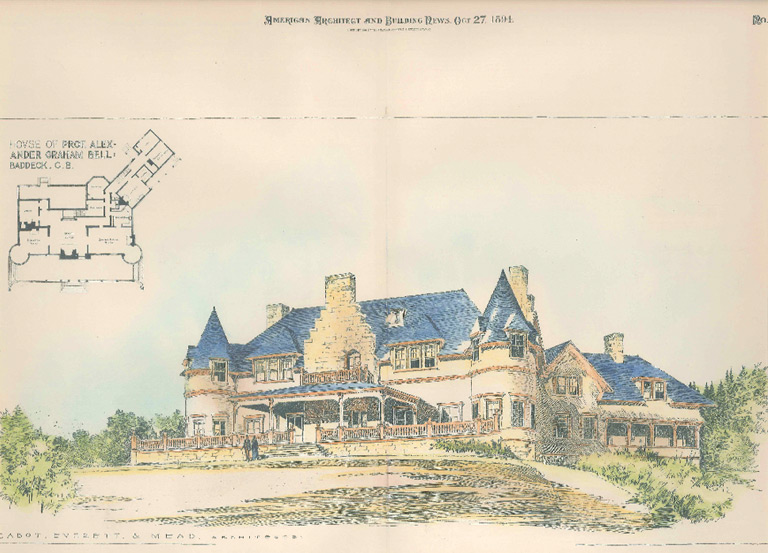 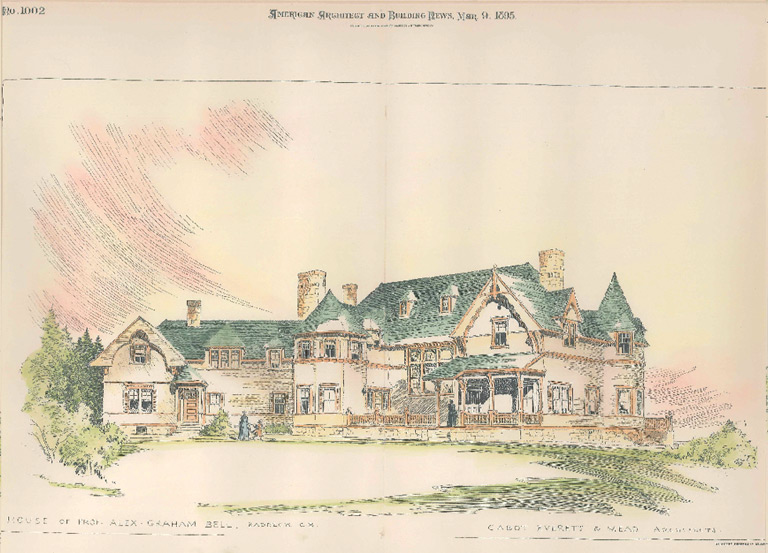 The Backdrop for Exploration & Innovation

It was at Beinn Bhreagh where the majority of the Bells’ experiments and scientific discoveries were made across a diverse set of subjects: flight, water, vegetation, sheep and more.

To establish such a centre in rural, some would say remote, Cape Breton was unusual.  Most scientific and inventive facilities were located close to hubs of commerce and trade.  Yet, in the early 1900’s, the Beinn Bhreagh estate would become one of the most important sites for two kinds of technological invention that gripped the world’s attention: the quest for human controlled flight and the pursuit of high speed water transportation. (B. White, 2017)

It was also the place where social development transformed the community and beyond, led primarily by Mabel, initiating the first Montessori school, the concept of equal pay for women, and good working conditions for all.

Ultimately, the Bell Family fed the economic engine for Baddeck, sustaining local employment, impacting and inspiring a generation of families living in Cape Breton and beyond.

The Bells found they had the perfect location for gardens with a slightly longer growing season and could grow excellent crops, including exotic varieties that, it was reported, wouldn’t grow a mile down the road. The gardens at Beinn Bhreagh became one of the Bells’ most successful endeavours, supplying fresh produce to feed the many family, friends and employees with additional revenue from the sale of surplus.

Mabel was the architect behind most of the garden development: flowers, vegetables and fruit orchards.

“Gardens were a lifelong interest for Mabel Bell. Older people remembered that on her walks through Baddeck she would lean over fences, look, and chat about what was growing. She oversaw the development of magnificent gardens at Beinn Bhreagh. After Daisy’s marriage in 1905 to David Grandison Fairchild, the plant explorer for the United States Department of Agriculture who helped develop the Florida citrus industry, Mabel often grew unusual foreign plants. One was the edible udo, of Japanese origin, which had been thought to have potential as a cash crop…. Mabel was a generous donor of flowers and plants, and for years udo roots flourished in local gardens.” — (Dorothy Harley Eber, biographi.ca)

Mabel emphasized a pleasing and colourful aesthetic for the eye. To expand the gardens’ diversity, she enlisted the help of her son-in-law Dr. David Fairchild, an American botanist and plant explorer for the U.S. Department of Agriculture, who was responsible for the introduction of more than 75,000 exotic plants and varieties of crops into North America. These plants included soybeans, pistachios, mangos, nectarines, dates, bamboo, as well as the Japanese cherry trees planted on the National Mall in Washington, DC. Fairchild was known to deposit seeds around the grounds of Beinn Bhreagh Hall, so the gardens are filled with specimen trees and plants that are rare to Canada, complementing the native flora.