A true partner in love, life and the full exploration of creative spirit – as Alexander’s wife, Mabel was an equal partner in all their work, their dreams, and their undying vision. Simply – she was his soul mate – and he, hers. It’s one of the great love stories ever told.

Born in Massachusetts, on November 25, 1867, Mabel was the second of four daughters. She lost her hearing after a bout of scarlet fever when she was five years old, but thanks to her parents’ determination and her own remarkable spirit, she learned to lip read in several languages and remained an active participant in the speaking world. She attended schools in the United States and Europe before becoming a private pupil of Alexander Graham Bell’s in Boston. She inspired her father to found the first oral school for the deaf in the United States.

“And the prettiest thing of all is Mabel herself.  Everything begins with her and works round again to the same.” — Mary Blatchford, 1911

As a family they spent the majority of time at their home at Beinn Bereagh, located in Baddeck, Nova Scotia, Canada, where her great passion for art, photography and gardening were at the centre of her world there.  In the 1890s Mabel’s interests also encompassed handicrafts. Picking up on ideas made popular by the English arts and crafts movement, she tried to introduce better techniques and materials so that home crafts could generate significant income for rural women. It may have been her example that led her daughter Daisy, to back the work of American occupational therapist Lillian Burke, who about 1927 helped Acadian women in the Chéticamp area of Cape Breton turn rug hooking into a source of profit.

Gardens were a lifelong interest for Mabel Bell. Older people remembered that on her walks through Baddeck she would lean over fences, look, and chat about what was growing. She oversaw the development of magnificent gardens at Beinn Bhreagh. After Daisy’s marriage in 1905 to David Grandison Fairchild, the plant explorer for the United States Department of Agriculture who helped develop the Florida citrus industry, Mabel often grew unusual foreign plants. One was the edible udo, of Japanese origin, which had been thought to have potential as a cash crop. It never caught on because, unless it was cultivated and harvested with great care, it could taste like turpentine. Mabel was a generous donor of flowers and plants, and for years udo roots flourished in local gardens.

Her delight with the outdoors extended as well to her participation in experiments at Beinn Bhreagh, to boating, and to excursions. Even in the months before her death she loved to camp out. As Daisy related, “She couldn’t read our lips very well by firelight, so in the evenings she put cushions on the ground and read by the car headlights.”

“Mother always did her own thinking,” Daisy recalled in a letter to the Bell Club some years after Mabel’s death, “and it is interesting . . . to realize what a completely original individual she was. I don’t think it was just because her deafness saved her from the endless objections and criticisms that so many of us hear when we have a new idea to put over. She just knew what she thought would be fun or interesting or worthwhile to do and then tried to do it.” — From Biographer, Dorothy Harley Eber

Mabel Hubbard Bellis remembered as far more than her husband’s companion. She was a tireless advocate, encouraging women to educate themselves and effect changes in various areas of society, including health, home industries, women’s suffrage, children’s labor and children’s education.

Mabel’s contributions to the community of Baddeck, the province of Nova Scotia and to Canada spanned the years 1885 -1922. Many would say her prime accomplishment was as the first woman in the world to form and manage an aviation company, the Aerial Experiment Association, in 1907.  The Association launched the first manned aircraft in Canada, the Silver Dart.

Mabel’s more long-term significance was to empower Canadian women and children, particularly in rural areas. She was a tireless advocate, encouraging women to educate themselves and effect changes in various areas of society, including health, home industries, women’s suffrage, children’s labour and children’s education.

Mabel’s lasting contributions include: the founding of Canada’s first and longest continuing women’s club – namely the Bell Club formerly known as the Young Ladies of Baddeck; the first chapter of the Canadian Home and School Parent-Teacher Federation; the first Canadian Montessori School; the Baddeck Public Library, the first public library in Canada; and conducting agricultural research for the Bureau of Soils in the United States as well as the Central Experimental Farm in Ottawa.

Mabel died only five months after her husband, on January 3, 1923, and like him is buried on atop their beautiful mountain, overlooking the Bras D’Or Lake. 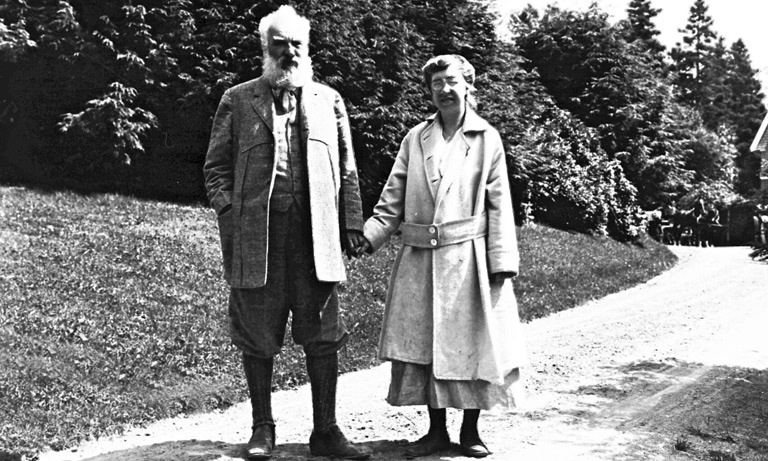 “To me indeed the Club (Bell Club) has fulfilled its objectives of stimulating the acquisition of general knowledge and promoting socialibility, still among my dearest memories are meetings with the people of Baddeck.” — (Beinn Bhreagh Recorder, v. Vlll, pp. 236-37)