Perhaps his legacy to aeronautics will never be seen as being of the same magnitude as his other accomplishments. However, Alexander, without a doubt left an indelible mark upon aviation, not only through his own research, but more importantly by his stimulation of interest in scientific aeronautical research by others. His interest in aeronautics spanned almost all of his mature life; it all began as he studied the flight of crows.

“I have no doubt that a machine will be driven from the Earth’s surface at enormous velocities by a new method of propulsion – think of tremendous energies locked up in explosives – what if we could utilize these in projectile flight!”
—  Alexander Graham Bell in 1915

He made outstanding contributions to aviation, particularly through his development of tetrahedral kites, the investigation of their application to personnel carrying aircraft, and his enlistment of talented associates who aided significantly in the progress toward accomplishing powered flight.

His summer home at Baddeck, Nova Scotia, afforded excellent conditions for his scientific interest in flying kites. It is here, over the next three and a half decades that Bell delves deep into the fanciful and futuristic – rockets, heavier than air flying machines, water distillation, tetrahedral towers, sheep breeding, hydrofoil boats and more.

Expanding upon the design of the rectangular-celled box kite that Hargrave of Australia invented, Dr. Bell developed a three-sided triangular form of cell which he adapted to various multi-cellular shapes. This research led to a large kite in which on December 6th, 1907, his associate, Lt. Thomas Selfridge, flew to a height of over 160 feet.

He developed the tetrahedral cell with aerodynamic lift and tested a variety of kites formed with these cells. His “Cygnet” kite flew for seven minutes at a height of 168 feet with a man on board in 1907.

“Dr. Bell’s theory of a flying-machine differs from other aeronauts, inasmuch as he claims that the kite-principle is the only one by which the air can be successfully navigated, and it is along this line that he has been conducting his experiments.” (Thomas Johnson, The Canadian Magazine, v.xx, no. 4, February 1903)

In June 1903 Bell published The Tetrahedral Principle in Kite Structure in the National Geographic Magazine (XlV No.6).  In this article Bell stated: “I have been continuously at work upon experiments relating to kites.  Why, I do not know, excepting perhaps because of the intimate connection of the subject with the flying-machine problem.”  “I have had the feeling that a properly constructed flying machine should be capable of being flown as a kite; and conversely, that a properly constructed kite should be capable of use as a flying-machine when driven by its own propellers.  I am not so sure, however, of the truth of the former proposition as I am of the latter.”

Alexander Graham Bell and Aviation Through the Years

“We breathed an atmosphere of aviation from morning till night and almost from night to morning…I may say for myself that this Association (AEA) with these young men proved to be one of the happiest times of my life.”
— Alexander Graham Bell

Believing that the substitution of an engine and propeller attached to the kite might permit free man-carrying flight, dispensing with the tethering line, Dr. Bell and Lt. Selfridge secured the services of Glenn H. Curtiss. Curtiss helped them to construct a proper engine, and they also engaged the assistance of J. A. D. McCurdy and F. W. Baldwin. With the leadership and financial assistance of Mabel Hubbard Bell, these five men formed the Aerial Experiment Association for the stated purpose of “getting into the air”.

Beginning with a parallel-surfaced biplane glider, this group developed successively improved airplanes whose flight performances advanced from a few hundred feet in 1908 to twenty miles in 1909. These airplanes achieved several feats, including the winning of the Scientific American Trophy for a flight of over a kilometer, the first flight in Canada, and a total flight distance of over a thousand miles. The group was also responsible for the development of the aileron.

Although Dr. Bell’s powered and manned tetrahedral aircraft did not fly, his place in aeronautics remains prominent due to the accomplishments of the group of which he was a vital part and an inspiring counsel.

In 1885 he studied a heavier-than-air machine. In 1892 he described “The Flying Machine of the Future” which had the same basic features as the helicopter, developed 40 years later. He explored numerous rotor blade shapes and ingenious “winged flywheels”, which often flew to heights of 200 feet under their own power. Some used mechanical power, others used rockets and one even was jet powered. He even experimented with gunpowder to provide propulsion for his flying devices. He had tremendous faith in Man’s ultimate conquest of the air. Bell once said, “The problem of aerial navigation will be solved within 10 years.” This prediction proved correct when the Wright Brothers eventually did solve it at Kitty Hawk.

Bell’s friendship with Samuel Langley of the Smithsonian Institution greatly influenced Graham Bell. He once said, “For many years past, in fact from my boyhood, the subject of aerial flight has had a great fascination for me and I was therefore much interested in the researches of Langley.” He witnessed Langley’s large steam-powered model aerodrome experiments in which, for the first time in the history of the world, a man-made device flew and preserved its equilibrium without the aid of a guiding human intelligence. Afterwards he wrote, “The sight of Langley’s steam aerodrome circling in the sky convinced me that the age of the flying machine was at hand.”

In 1907, Bell formed the Aerial Experiment Association (AEA), an innovative aviation start-up with four young men and financed by Mabel.  The other AEA members included:

Their goal was simple – to get a man into the air, aboard a powered flying machine.  Each member was responsible for the design and development of an aircraft. They succeeded.  Their machines – two large kites and four airplanes, were some of the first flying machines seen in the air in North America.

By 1909, the AEA’s fourth and final plane, the Silver Dart flew over the frozen waters of the Bras d’Or marking the first flight in Canada.  Ten years later in September 1919, Bell was still experimenting, this time with speeding hydrofoil boats that broke world speed records.  The HD-4 travelled 70.86 (113 kilometers) per hour skimming across the lake.

“One of the first and most successful experiments in creating a hub of skills was Alexander Graham Bell’s team of like-minded tinkerers who gathered at his family estate at Beinn Bhreagh near Baddeck in Cape Breton, Nova Scotia.  While wildly creative himself, Bell was humble…So he built a team to refine his ideas and find better solutions by using their own specialized knowledge.  This early notion of reliance on a team was distinctly Canadian.  Copied around the world, it has evolved into a concept now referred to as the hub.” (Ingenious – How Canadians Innovators Made the World Smarter, Smaller, Kinder, Safer, Healthier, Wealthier and Happier, David Johnston & Tom Jenkins, Random House McClelland & Stewart, 2017)

Construction began on the fourth airplane, the Silver Dart. Meanwhile, Selfridge went to Washington to serve on the board testing the Army’s first airplane, and was subsequently killed.

When the Silver Dart was complete it was shipped to Baddeck and successfully accomplished the first airplane flight in Canada. 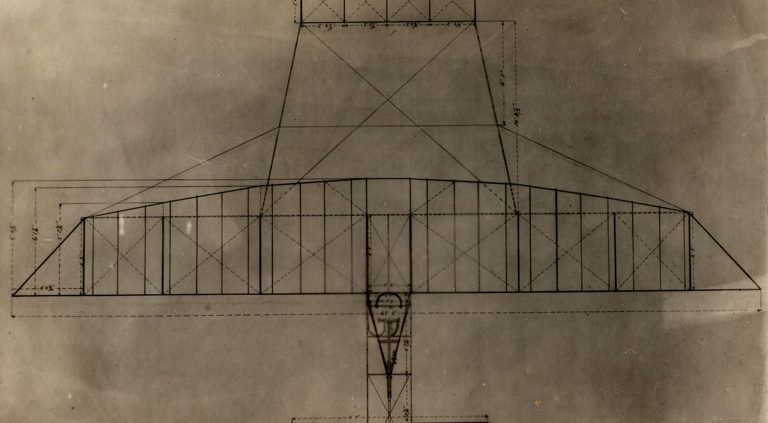 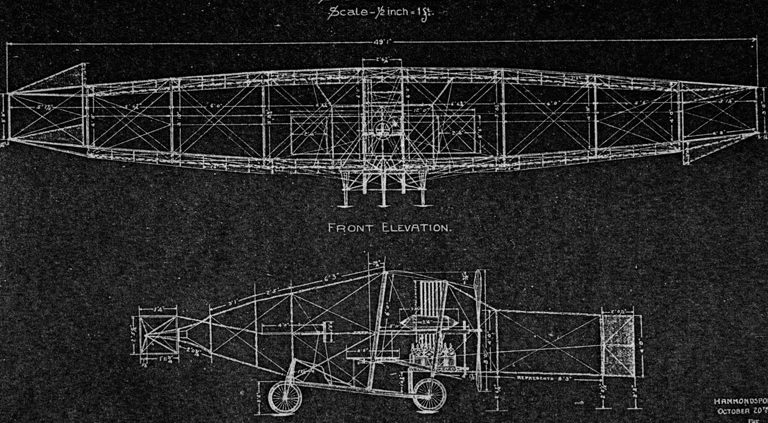 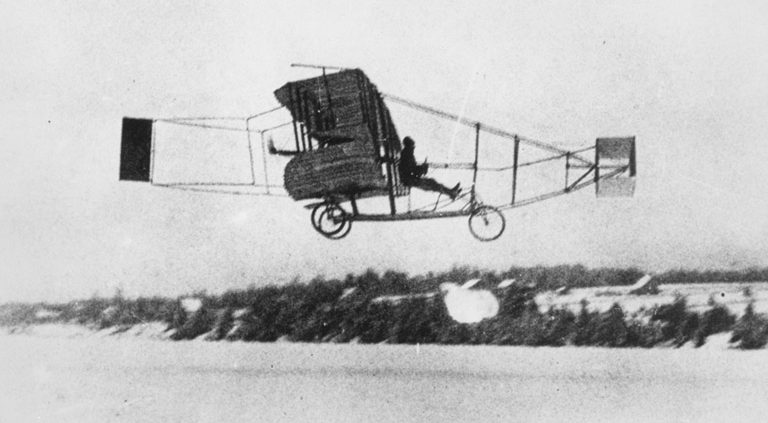 The Association built one large tetrahedral kite “Cygnet II” and this time added an engine to it, but it failed to get into the air and the group did not pursue this concept any further. Bell’s Aerial Experiment Association now dissolved and he was gratified by the progress the group had made. It had built four airplanes, developed the hinged aileron concept, and the group had received wide public recognition for its contributions.

Next, Bell financially backed the Canadian Aerodrome Company, which became the first airplane company in Canada, and built several airplanes. For two more years they tried to further interest the Canadian Army but it refused to support their work and the company disbanded.

Now Bell focused his efforts on air propeller driven boats. To free the hull from the water, he developed hydrofoils. These were wing-like elements which lifted the boat from the water so it flew on the water, supported only by the bottom-most foils. His work reached its pinnacle when Bell built a huge torpedo-shaped craft powered by two air propellers which could skim over the water at 70 miles an hour. However, the development of his hydrofoil concept was not to be realized until after World War II. As a Regent of the Smithsonian he was most influential in a drive for a National Aeronautical Laboratory. After several years of lobbying, Congress finally established the National Advisory Committee for Aeronautics which was to serve aviation well for the next forty-three years.

In 1915 he said, “I have no doubt that a machine will be driven from the Earth’s surface at enormous velocities by a new method of propulsion. Think of tremendous energies looked up in explosives. What if we could utilize these in projectile flight!” Bell came close to foreseeing today’s rocket-powered space craft. After World War I, at the government’s request, Bell studied and outlined a policy for military aeronautics. He said, “Air power will prove to be the decisive factor in future wars.” He said, “We may conclude that neither our Army nor our Navy can defend the United States from attack through the air. This requires the addition of a third arm to our system of national defense, a National Air Force, quite distinct from the Army and Navy, capable of cooperating with both, and also capable of acting independently of either. Also, it should be provided with a special college upon the model of those at West Point and Annapolis.” The prophetic ideas that Bell expressed in this statement would not be adopted until after World War II.

“Anytime you went down Beinn Bhreagh road at Red Head, Dr. Bell had kites flying. It was beautiful in the air. Sometimes, depending on the wind, they would move back and forth and up and down like any ordinary little kites. But he was testing all the time, trying to get something lighter than air, experimenting with the tetrahedron. That’s why he flew those kites. He was really trying to get a machine that would fly.” — (Genius at Work, P.13)

“I remember that during Mr. Bell’s study of the air currents in those early days he would sometimes send up into the air over Baddeck Bay at night dozens of large coloured paper balloons, fashioned in many shapes such as giant men, horses, cows, elephants, etc. and lighted and glowing.  What a delight it was to us young people, or for that matter to everyone else in the place, old and young, to see those lighted men and animals floating in the sky on a calm night, high and low…” — (Genius at Work, P. 25 Douglas McCurdy)